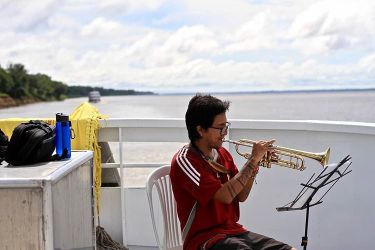 I sort my ticket for the seven-day trip West to Leticia through a local vendor. If you’re interested in how to get tickets see here

Once the ship is in dock and you’ve bought a ticket you can stay onboard for the night or two ahead of departure for no extra cost. I opt for this option – saves having to find somewhere else to stay, and is a great way to witness life in the port.

For the week-long journey to the Peruvian-Colombian border, our converted pleasure boat, GM Oliveira, doubles as a freight ship for the smaller provinces along the river. All kinds are loaded on, from motorbikes to fridges.

The dock is noisy with the clanging of cargo on steel, and the cacophony of shouting dulls into the background as I settle in onboard.

It’s not like the ferry to Calais here – you don’t book a cabin; you sling a hammock from the steel girders in the open-plan sleeping deck.

I pitch my hammock in a comfortable spot and hang my oversized bag from a heavy-duty hook. Lying in my hammock, I gaze at the exposed terracotta-painted metalwork, a row of luminous orange lifejackets rest on wire shelves running the length of the deck, their loose straps hanging down, lazily waving in the breeze.

Whilst the sky is shrouded by brooding grey clouds, the water itself is calm and the hammock sways lullingly with the boat’s movements.

As the days pass and the ship slowly empties of its cargo, a surprising number of new passengers board. The ship is busier than I had expected, and the crowded hammock deck becomes quite uncomfortable, with neighbouring strangers’ feet intruding over my hammock, and parents frantically trying to discipline their screaming kids.

Away from the undulating patchwork of zigzagged hammocks, I take time out on deck to soak up the true atmosphere of the Amazon River. The smell of saturated vegetation makes a refreshing contrast from the heavily over-crowded dormitory. 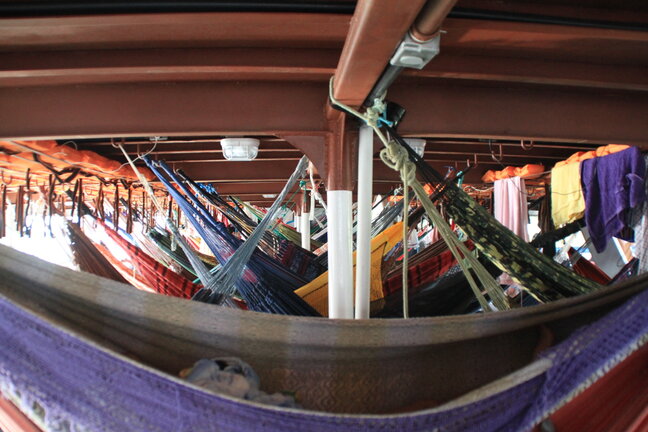 At night, giant river bats swoop low and snatch at struggling insects, ill-fatedly lured to the glow of the ship’s lights. Leaning over the bow, I watch huge fish swirling in the ship’s path, unbothered as the ship gently carves through the water.

A few times through the trip, the deck hands return a large catch and the chef serves up freshly-caught catch of the day in the mess.

The food is surprisingly good and the canteen serves up three meals a day. Breakfast is standard Brazilian fare – coffee, juice, bread. Lunch on the river consists of meat, served with bread. And in the evening, a loud dinner is enjoyed by all.

Acai berry smoothies make frequent appearances, and locals clamber onboard the ship from their canoes to flog fresh fruit and veg as we pass their communities on the river banks.

Friendly local farmers aren’t our only visitors. We started the journey with a police inspection in Manaus, seeking out criminals on the run. On more than one occasion once we’re on the move, the Brazilian equivalent of the Marines board the vessel, perhaps looking for drugs. Maybe with a wanted person in mind. They leave empty-handed each time.

As with any expedition in remote territories, it’s important to have your wits about you. Passing through a region called the Coari High Risk Area, the ship calmly ploughs on, making steady progress through the region known for its violent gangs.

Several more welcoming communities also call the banks of the Amazon home and the ship docks in many friendly townships on the route. We have a laugh drinking and dancing with locals in Miraflores, Fonte Boa and Florianopolis.

Seven days on the river culminates with our docking in Leticia, the southernmost city in neighbouring Colombia. Unsurprisingly, for a city in the midst of the Amazon, Leticia is home to almost 900 species of bird and over 6,500 different types of plant. The indigenous Amazonian communities also contribute to the cultural richness of this incredible place.

It’s a fantastic city to continue my exploration of the largest rainforest on planet Earth.