Myths and Legends of Guyana

Guyana is located in the northeast of South America. It has a thin coastal region that borders the North Atlantic Ocean, and to the southwest are high upland savannahs. However, the majority of the country remains covered in dense rainforests.

The countries people share an origin with those across the Caribbean. They are a founding member of The Caribbean Community (CARICOM) and share many customs and beliefs with other Caribbean nations.

Thanks to waves of colonialism, the country is a melting pot of religion. The mainstream religions of Christianity, Hinduism and Islam are all vying for primacy amongst a populace that still holds traditional folk religions and ideas. The country also contains many indigenous tribes, known locally as 'Amerindians', which comprise nine separate groups. The nine tribes are the Arawaks, Wai Wai, Caribs, Akawaio, Arecuna, Patamona, Wapixana, Macushi and Warao.

The beliefs that arose from a mix of religions and ethnicities, combined with the nations' history of colonialism, created today's Guyana. It is these that I have found fascinating and wanted to share. Myths, legends and folktales provide continuity in culture, bringing stability and a shared understanding of what life and death appear to be to any group that shares the same ideas. They help build on concepts that we teach our children, often inspiring obedience or common sense. Think about the familiar British tale of the boy who cried wolf, a morality tale that suggests that you should not mislead people or they will stop believing you. There are many such tales in Guyana to terrify the children and keep adults a little jumpy. Here are a few that I have heard.

The Old Higue, or Hag, is an old witch that lives on the edge of a village through the day and becomes a ball of fire at night. She flies through the air, seeking juicy babies or small children to suck upon, vampire-like.

Thankfully, to keep the Old Higue away is relatively simple – place a broom made from manicole palm over the doorway, and put a bowl of uncooked rice on the floor. She becomes distracted by counting rice grains rather than perusing the children, and all is fine.

My own expereince with this tale was a late/early morning canoe trip on my Essequibo expedition found here.  it was around 3am in the morning of maybe day 8 or 9 we set of to make good distance from a previous slow day navigateing rapids.  My guide froze on the spot and whixpered panically to his dad, the other guide of the trip.  Saying look it is old higue there was balls of orange in the forest on the river banks, my own thought process was a ball of fireflies but no, not to my indigenous guides. 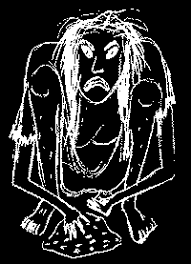 Obeah is the most prominent contender with modern religions in Guyana. It is a folk religion brought over from Africa that has been passed down since the days of the slave trade and is still present today. Within the Obeah religion, advice is sought from spiritual elders (long since dead, not just the old folk!) on a range of important topics, such as health, romance, work, money, and so on. Of course, consulting with the dead is seen as a risk, and many who do so will wear charms and other devices to protect themselves from any harm. As a consequence of this, spirit possession is considered a serious concern.

In Guyana, there is a belief that those who were evil in life will come back from death as an evil spirit, called a Jumbee, to haunt the night and terrify those who believe in them. Interestingly, despite most of the country's population being Christian, this idea is strong and present, having crossed from the Obeah beliefs.

The Moongazer is so tall that his head is at the level of the tallest coconut trees. He wants to stare at the moon all night without so much as blinking. But children are warned not to disturb his serene activity because he will suck your brains out of your head if they do. You have been warned!

At the other end of the scale is a tiny little man called The Bacco. He fits inside a bottle which is stoppered with a cork. When found, he can perform good and evil acts – rather like the classic genie tale. However, there is a fear that any old bottle found could contain an evil version, a Dutchman's Bacco – and so bottles are typically reburied or thrown out to sea to get rid of them, just in case. The little fellows are expensive to keep and require vast amounts of milk and food to keep happy. This belief dates back to when the Dutch first settled in the Guyanas in the early 1600s. 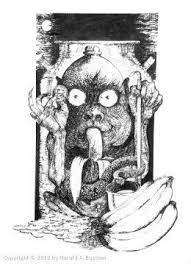 The Massacurra Man is a water devil that is active in the evenings and is liable to grab unsuspecting victims from a riverbank and drag them under to drown or have their necks broken. The name is thought to be a portmanteau word, originating from the days of the slave trade once again. In this case, the combination of 'Massa' referred to the plantation owner and 'Curaban', which was a tracker.  A little mispronunciation along the way, and you have the Massacurra man.

The Kanaima my favourite, If spending too much time near the water seems a bad idea with the Moongazer and Massacurra Man out to get you, you'd be mistaken if you thought you were safe out in the jungles. The Kaniama is a cannibalistic bush devil that stalks the deep jungle, looking for unfortunate prey that has stumbled too far from the villages and rivers. Once he catches his victims scent, he will track him and eventually kill him, it is though or believed that Kaniama are capabale of shapeshifting into any number of animals even if it takes years.  My own expereince with this lore is an interesting one again on one of the moddle days of my 12 day expdition the guyanas interior we came to an area known locally as Kurapakari.  An area known for its more riskier charecters illegal, miners hunters and people smugglers aswell as Kanima.  As we got to this are we had seen nobody, until we did and I was told several times and stressed that I should not look at these men.  As we continued our paddling we were ushered over and all 3 of us were trying not to make contact until they crossed into our path.  Concerned as we were told to be earlier on in the expedition.  As we followed they simply offered us a fish they had caught and small talk what we hd done what they had done, an interaction of no ore than 25 minutes.

Thankfull for our easily earned meal for the next day or so, my guide Ossiah said he was Kanaima.  Almost chokeing on my dark colured purified water Campbell my other guide agreed.
The story surrunding these men and one in particular, I would describe him as powerful looking countless scars and a missing eye.  The supposed Kanaima had once lived cose to Apoteri and had fel in love with a girl he did not feel the same about him she had feeling for another so on knowing this our new found friend and supposed Kanaima had tracked him down over several years as a younger man.  and found him sleeping in a hammick and simply killed him with a knife and his bow and arrow for good measure.  He had now been living in the jungle for a long time and has never been found by the authorities because he is Kainaima and can transform into a jaguar if he wanted to.

It's very easy to dismiss folklore and maybe even wonder why it still holds such a firm hold on a populace. Guyana and its surrounding nations are nothing like the countries many of my readers originate. Guyana is the second-least populace nation in South America, and TV did not even begin to appear there until the 1980s. Storytelling has been a way to pass on fables, morals, ideas and wisdom for centuries. While the unstoppable creep of the modern world is slowly intruding, it may be some time before these tales become nothing more than a collection in a book. Personally, I hope that fate is slow to arrive for these traditional Guyanan folk tales.