Posted in: Latest News
The flight from ogle airport took a little over an hour. The plane we flew in was tiny the pilots seat the second seat in the front and four more behind in rows of two. Where a young couple sat with a newborn baby who did not murmur for the whole journey. As we took off I set my camera up on the dashboard of the cockpit, facing outwards to view the horizon. The view was only of Georgetown for about 2 minutes then before the cloud cover began, there were sporadic towns and settlements. There was also a few mining operation that could be seen, but again not for too long. Then the forest was evident it was for as far as you could see. In either direction for 25 – 30 minutes as we got closer to Linden a few roads could be seen primarily the Linden highway which from Georgetown and linked them both. So as we began to get passed the Linden settlement the only major town between Georgetown and my destination of apoteri. It was again just dense forest horizon to horizon with countless rivers winding through which is a key to why at one point it was and is still sometimes referred to as the land of many waters. 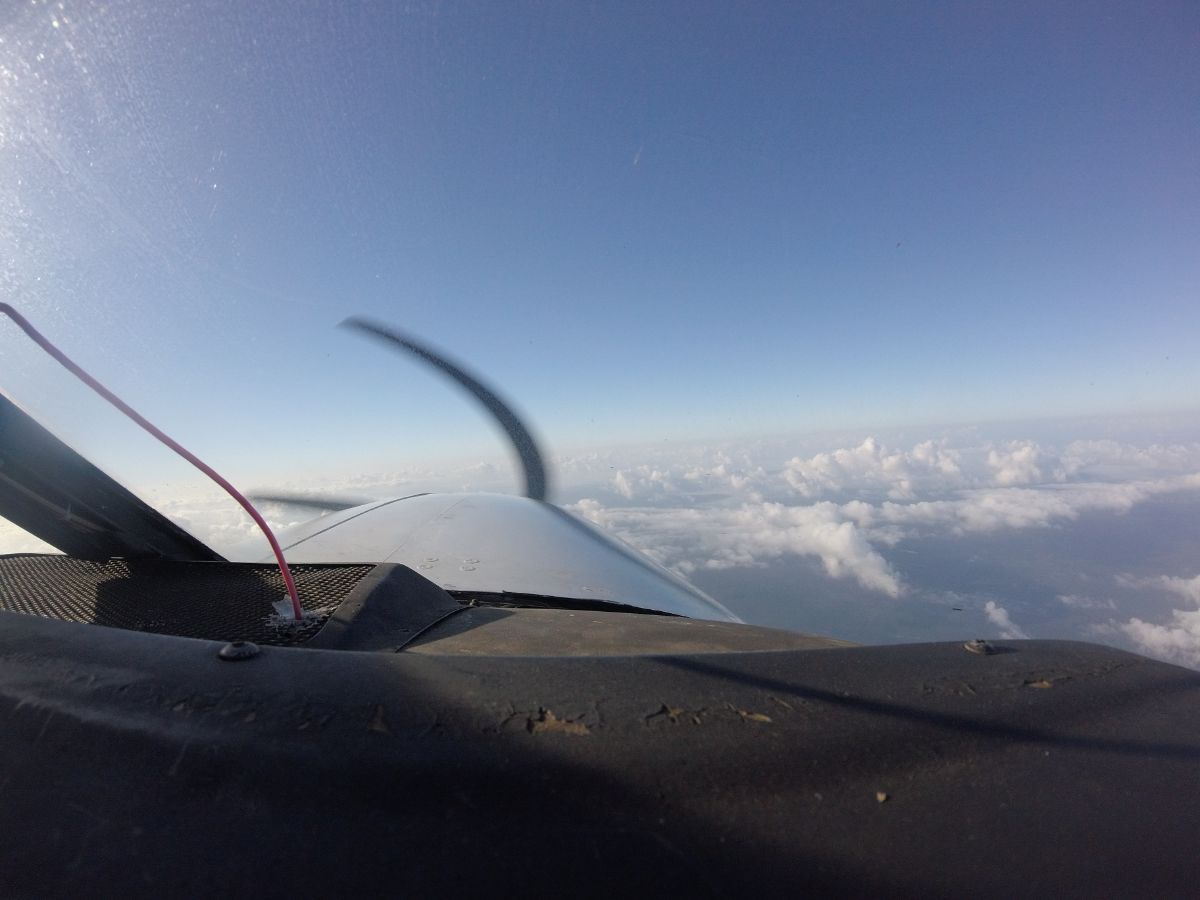 So the clouds began to spoil the sight again but before we knew it the pilot told us he would be descending shortly. But it will be slightly rocky as there are a lot of clouds to get through. Nothing or nobody could have told me what to expect or how to prepare for it I have been too dense forested region before such as the Darien Gap and the Pacific side of Costa Rica. But have always travelled to them via land or boat, but never flew into such an area where you could literally see no settlement, no sign of human activity for easily hundreds of miles. I was in shock and mainly to believe there is still places like this still thriving without any of humankind interrupting, but are living off it. As we began descending in the distance you could see a small strip of clear land the pilot reminded us it would be bumpy to land we passed over it and then a full change of direction and last minute lining up. the pilot double checked the screens in the cockpit and a high pitch whistle began which was I presume heat being released. We finally could see a few people waiting for the replenishing of stock. We were reminded that parts of the plane will still be hot so be careful. As we got off there were a few American sports fishermen also leaving and the same plane as I sat down with my bag on my own there was a few kids just staring at me confused what I was doing here on my own then a lady came up to me and asked if I was Daniel I showed them my emails and permissions granted for me to be in a local indigenous community all was well. The community came and introduced themselves to me after the previous guests had left one by one. The ones I was to remember were eventually agreed as my guides 2 days later, Fay the lady I was hoping to meet as she was a local connection and friend, of my friend Luke Johnson back in Georgetown. Where I explained my plan to them to travel down from apoteri to Bartica all via the Essequibo river on an indigenous dugout canoe. They laughed and then told the others in the crowd again they laughed and said ‘how long you got boy a 1 month it a take’ I laughed with them but then they began to think of who could do it who has done it and they came up with one name but then said I would need to change over a few times in different locations, as one person may know the river to a point. Also, another person should come along for safety for example if myself or any other team members fell into the river or got injured one way or another. I helped load up the supplies which came along with me on the flight bags of cement to bags of rice to new fishing rods and a number of equipment used for building I was asked by Faye where I would want to stop I could stay in the village of Apoteri where I would, of course, need to pay, or stay with her on her own island and plot of land used for sport fishing. Specifically, the huge arapaima fish where people for half the year travel to this part of the world to fish for. 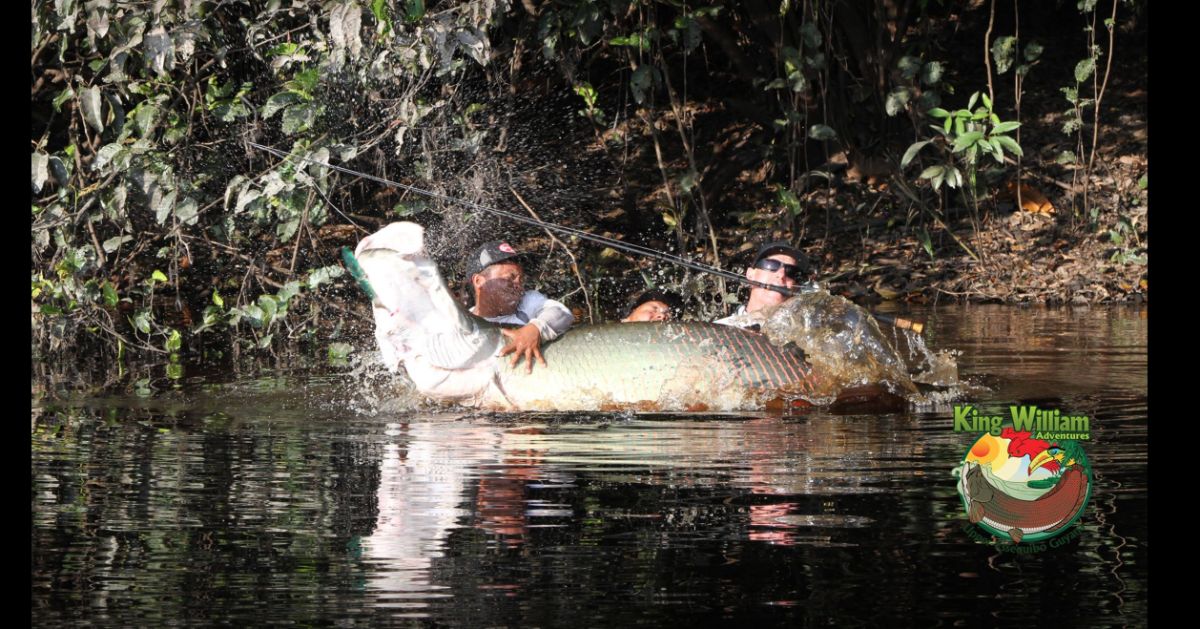 I immediately said I would prefer to stay at hers as it is another 2 hours passed apoteri deeper into Guyana’s forest. Where very few people will stay or explore. after helping load the boat of the supplies brought in we set off in a speed boat myself Ossiah and the owner and sister of Ossiah property. Fays property was on an island in the middle of the Essequibo it was a small paradise in my eyes where it would not be a shock if you were to see a jaguar or harpy eagle. Most weeks a bit wishful but it would not have surprised you, As I got off the boat Fay asked a lady to setup a cabin for me and brought a beer over to me I put my heavy bag inside and got a satellite phone out and rang family back in the UK. I tried my best to explain the place I was in and to give it justice when doing so. After my beer, I set off with my camera to take some pictures where I got shots the countless birdlife and the caiman which surrounded the island. As the day went on I was offered out to help fish, me fishing I had no clue fished on a small scale previously. The fish were a constant sight all around from huge arapaima surfacing and bubbling to lowa lowa. and with the countless fish were again the countless predators. The highlight of that day was seeing giant otter come within 10 metres of the boat to show their curiosity. As the night went on and it began to get dark we had caught plenty of piranhas but no arapaima tonight. We headed back with fresh fish already cooked a thing called bake with fresh plantain and home made juice. Over dinner, myself and Fay had a talk and a plan for the following day we had left her parents home that day after dropping some supplies and we had left it with him to find a guide and a canoe so the high expectation of tomorrow was mind boggling and genuine excitement and apprehension, as well as a host of all other emotions. Fay promised me her dad was the right man for the job and assured me not to worry. I thanked the family all individually and at around 2130 I headed off to bed and a cold shower was overdue. The jungle chorus is something to be amazed by from the insects chirping water splashing small scurrying sounds, around the outside of your cabin and distant storms along with the deafening sounds of countless frogs. The sound in real time is unbelievable and know mp3 or video will ever do it justice. I used my spot gen3 device and let people know my GPS I used my spot gen3 device and let people know my GPS coordinates and of I went into a deep sleep.